Posted by Jennifer Thompson on Jan 15, 2011 in Local News

One year after a devastating earthquake struck the capital of Haiti, Frank Flaman has once again generously given half a million dollars to support the relief effort.

In a simple presentation on Jan. 12 at Flaman Sales in Nisku, Flaman donated $250,000 to the Salvation Army and $250,000 to Oxfam. These funds are in addition to the $500,000 he donated to the same charities shortly after the earthquake hit in 2010 through the Frank Flaman Foundation.

“These charities do a lot of good work,” says Flaman. “And there’s a real need in Haiti. There’s still so much suffering there – people are living in tents with no clean water.”

Around 230,000 people died and 1.5 million were left homeless after a magnitude seven earthquake struck the Haitian capital of Port-au-Prince last year. Billions of dollars in international aid have been donated toward relief work, but money is still needed to reconstruct the devastated city.

“This donation is a symbol of the generosity Canadians continue to demonstrate as Haitians struggle to rebuild their country,” says Robert Fox, executive director of Oxfam Canada. “It's a tremendous display of support at a time when it's needed most."

Since the earthquake, Oxfam has provided clean drinking water and sanitation facilities to more than 400,000 displaced people, provided 98,000 people with emergency shelter, distributed hygiene kits containing personal-care items like soap, shampoo and towels to 120,000 people and assisted 175,000 people in reopening businesses and removing rubble through cash-for-work programs. Among other programs, the organization has spent $19.5 million on water, sanitation and hygiene and $11 million towards emergency food security and livelihoods programs.

“I would like to express our sincere gratitude for the support Frank Flaman has provided for our work in Haiti,” says Karen Diaper, The Salvation Army’s assistant public relations director. “This donation will help many people on their road to recovery and redevelopment. Without such community minded, generous people as Frank Flaman, The Salvation Army wouldn't be able to provide such assistance, in Haiti and around the world.”

Along with its support for Haiti, the Frank Flaman Foundation has funded and helped countless global charities provide their valuable services, both locally and around the globe. For more about the foundation visit www.flaman.com/foundation 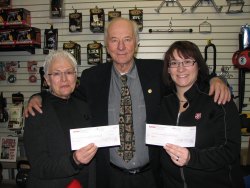