Be ready for harvest 2020: Summer is the time to build your bins & install your grain handling equipment

As seeding is coming to a close throughout the province, you may be starting to think about the next steps in your farming operation for 2020. This likely includes thoughts of additional Grain Storage, Grain Handling, and even Grain Drying equipment.

It may seem early to plan for harvest, but summer is a great time to build your bins and install your grain handling equipment to move the crop come harvest time. Buying now will ensure your equipment is installed and ready to go in the fall – so you can have peace of mind all season long....

Harvest 2019: An unconventional way to dry your grain in wet conditions 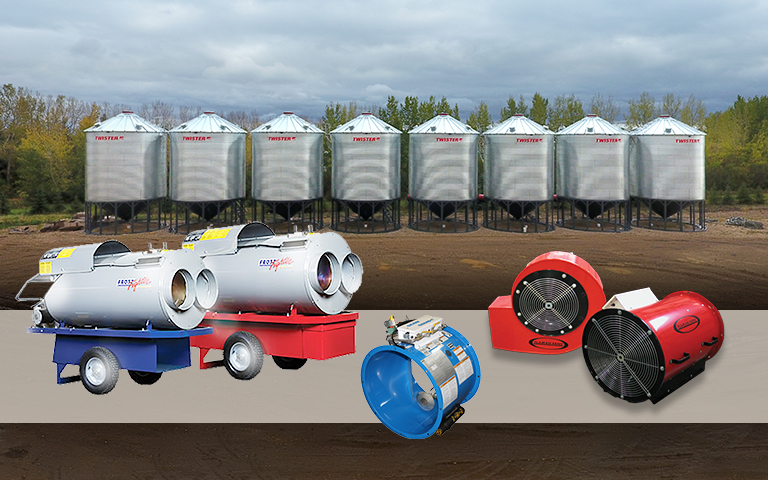 The 2019 harvest is shaping up to be frustrating for most.  It’s no secret that harvest is well behind this year, with only 34% of crops being combined in Alberta (47% 3-yr avg), 47% in Saskatchewan (75% 3-yr avg), and 71% in Manitoba (85% 3-yr avg) as of last week.  Wet weather has plagued the prairies, with record rainfall in Manitoba and snowfall in southern Alberta & Saskatchewan in September.  A combination of high moisture levels and widespread crop damage has contributed to diminished grade.

It’s now a race to get remaining crops off the field and although we can’t control the weather, we can help you maintain the grade of your grain by getting it dried faster and limiting spoilage.  The most effective option is a NECO dryer from Flaman, which can be scaled to the size of your operation.  However, dryer installs are contingent on many environmental and logistical factors and it’s far from a guarantee that a dryer purchased today would be installed before the end of harvest.

So, what does a farmer do if he or she can’t get a dryer installed in time?

Our team in Saskatchewan has heard a lot of stories from our customers who’ve resorted to unconventional methods to dry their grain. The overwhelming favourite by local farmers has been the Frost Fighter (available only at our Saskatchewan locations), which is a diesel-powered 350,000 BTU industrial heater designed to heat remote construction sites and shops. As it turns out, they are also easily adaptable to a bin aeration system and can pump heat into two bins simultaneously. It’s been a lifeline given the soggy conditions.

Kelly Stewart, the operations manager at our Flaman Moosomin location, was the man who made this idea a reality:

“I saw a video a couple years ago of an Alberta farmer using a similar method and he claimed it worked like a charm. It inspired me to try it out given how wet it’s been this year. Some local farmers put it to work and were extremely pleased with the results.  It’s not a perfect solution and we know it’s not recommended by the manufacturers, but desperate times have forced us to think outside the box.

With a little extra work, moving your grain around and monitoring your moisture levels closely, we’ve heard from many happy customers that have seen up to 30,000 BU dried in a week. Obviously, the best way to dry your grain is with a dryer but given how wet it’s been and with more precipitation in the forecast, this has been a great makeshift way to salvage what has been a tough harvest.”

Interested in learning more about grain drying? Talk to one of our agriculture specialists at your nearest Flaman location.

Fertilizer prices will likely decline in the short-term then grow in the long term.  So ‘yes,’ buying a big bin now and filling it makes sense.

First of all, what proof of a price decline is there?  The downtrend is highlighted by a recent potash sale to India by Belarus (one of the very few potash producers) at the lowest prices seen in over a decade; about a third less than last year’s level as global supplies of the crop nutrient exceed demand.

Belarus’ contract price is likely to become the benchmark for other suppliers to India, such as Russia’s Uralkali and North American trading group Canpotex Ltd., owned by Potash Corp, Mosaic, and Agrium.

For background see this story.

The underlying thing from this is, China usually sets the floor or lowest global price for potash with their purchasing, so given the bigger annual’ish China deal is still outstanding, prices will likely decline even further.

India and China, the world’s biggest fertilizer consumers, usually sign contracts earlier in the year. This year, deals were delayed as high stocks held by farmers meant there was no rush to agree a deal.

India’s deal is a rare instance of the country signing a potash supply contract with a major producer before China.  For more information, see this story.

But then, on the upside, Belarus and Uralkali (the Russians) are looking at working together again on potash marketing , thus ending the price war that has driven down the price of potash.  These two and Canpotex (PotashCorp, Agrium, and Mosaic) basically dominate the world potash market.

And, the major trend to drive fertilizer prices in the long term is that the world is adding about 1-million people per week to its population.  We need to feed this additional million per week from the same amount of farmland – so, fertilizer demand will grow.


To take advantage of the temporarily low fertilizer prices, a Meridian fertilizer bin is your best choice.